"Even a cursory review reveals"

Even a cursory review of the Federalist Papers will reveal this wasn’t the Founders’ understanding of democracy.

Whenever I've heard people say that something about a book is revealed by "even a cursory review" the implication is that an in-depth review would come away with the same impression about what the book has to say. I guess it is usually the case (at least when it comes to the most important theme or thesis) that an initial impression is correct. But when someone says "even a cursory review reveals" this or that, isn't that person implying that his experience is that initial impressions (the "cursory review") are actually wrong much of the time, at least kinda often? Otherwise why do they say even?

And then again, maybe saying "even a cursory review reveals..." is an admission by the speaker that he didn't read the whole book, and that he's leaving himself an out just in case the cursory review isn't consistent with what an in-depth review would conclude?
Posted by Ted Sternberg at Sunday, September 14, 2008 No comments:

From Richard A. Muller's Ice Ages and Astronomical Causes

Beginning in the early 1900s, the climate of the world began to warm. This is evident in Figure 1-1, which shows the average Earth surface temperature from 1880 through 1999. The temperature is an area-weighted average over the land and ocean compiled by the National Oceanographic and Atmospheric Administration, using an averaging technique devised by Quayle et al. ; see also . In the plot, "zero" temperature is defined as the temperature in 1950. The fine line shows the monthly temperatures; the thicker line shows the 12 month yearly averages.

The figure shows that the 20th century had a temperature rise of nearly one degree Celsius. That may not sound like a lot, but its effects are quite noticeable. In Europe, the great glaciers of the Alps, such as the Mer de Glace near Chamonix, have been in retreat, and the canals of Holland almost never freeze over, as they did in an earlier era to allow Hans Brinker to silver skate into legend. The effects elsewhere on the globe are more severe, with large areas of Central Africa, once fertile, becoming arid and no longer capable of supporting a large population. Although the reason for this warming is not fully understood, many climate scientists think it is the result of the addition of carbon dioxide and other greenhouse gases into the atmosphere by humans.

As we go back in time in search of earlier records, the historical record becomes less reliable. Fortunately, Nature has provided its own recording mechanism. As we will explain in Chapter 4, measurements of oxygen isotopes yield an estimate of ancient temperatures combined with total global ice volume – a combination which is just as interesting as temperature alone, if not more so. Data from a kilometer long core taken from the Greenland glacier, as part of the Greenland Ice Sheet Project "GISP2" , are shown in Figure 1-2. For comparison purposes, the zero of temperature scale for this plot was set to match that of the previous plot. For historical interest, we marked some events from European history.

Posted by Ted Sternberg at Friday, September 12, 2008 No comments: 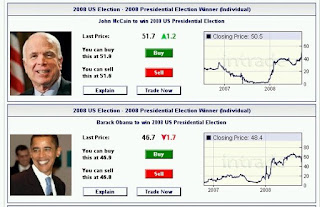 There's been quite a turnaround over at intrade.com, in the last week or so. An interesting question: what part of these prices is a risk premium, and what is the sign of that premium? At least the sign part is straightforward: if the "marginal investor" is a Republican, then the price of McCain is lower, and the price of Obama higher, than their respective probabilities of winning the race.

The price of "Sarah Palin to be withdrawn as Republican VP nominee", which stood at 18 on September 3, is now down to 6.
Posted by Ted Sternberg at Friday, September 12, 2008 No comments:

In his Public Intellectuals, Richard Posner characterizes a certain kind of op-ed column as a "solidarity good"; you read it to feel better about beliefs you already hold. As solidarity goods go, Roger Cohen's piece in yesterday's New York Times is a perfect example.

And he took his nation into desert wars and mountain wars, but, lo, he thought not to impose taxation, not one heifer nor sheep nor ox did Bush demand of the rich. And it came to pass that the nation fell into debt as boundless as the wickedness of Sodom. For everyone, Lehman not least, was maxed out.

So heavy was the burden of war, and of bailing out Fannie and Freddie, and of financing debt with China, that not one silver shekel remained to build bridges, nor airports, nor high-speed trains, nor even to take care of wounded vets; and the warriors returning unto their homes from distant combat thought a blight had fallen on the land.

So it was in the seventh year after the fall of the towers. And still Bush did raise his hands to the Lord and proclaim: “I will be proved right in the end!”

Almost all of the 379 readers' comments gush appreciation for the solidarity good they've so thoroughly enjoyed, and these comments in turn serve as second-order solidarity goods to be appreciated by readers who clicked the "Recommended" button. (You'd think "recommended" would be for a reader comment that says something notable, but no; here's one that got 118 "recommended" votes: Truly stunning. And I am normally a person of many words. But this piece has left me speechless. - ej, Ft. Collins, CO.)

I like that term, "solidarity good". But what should we call an op-ed that's sure to meet with near-unanimous disapproval? This Obama plug in the Jerusalem Post, for instance.
Posted by Ted Sternberg at Friday, September 12, 2008 No comments:

And these are the ones they bring out on parade...
Posted by Ted Sternberg at Tuesday, September 09, 2008 No comments:

Posted by Ted Sternberg at Monday, September 08, 2008 No comments:

How to buy respectability

What's the chance of the New York Review of Books publishing a "thought piece" by a currency speculator who's gotten lucky a few times but otherwise would elicit yawns and rolled eyeballs from the kind of academic
luminaries the NYRB normally turns to?
Pretty good, apparently, if he's already spent a fortune to fight evil (as the NYRB sees it).

Someone should tell him it doesn't help his case to dress up fairly simple ideas in pretentious philosophical language. In particular, many people have argued that financial markets tend toward boom-and-bust cycles, that investors tend to engage in herd behavior, and that financial systems are subject to self-justifying panics. But such observations are not enough for Soros: For him they must serve as illustrations of the general principle of "reflexivity," which I take to mean that human perceptions both affect events and are themselves affected by them. Gosh, I never thought of that!

Posted by Ted Sternberg at Monday, September 08, 2008 No comments:

All carrots and no stick


North Korea has begun reassembling its main nuclear complex, its only known source of bomb-making plutonium, the South Korean government said Wednesday, but the United States cast doubt on the seriousness of the North’s efforts.

The North announced last week that it had stopped disabling its nuclear facilities at the complex, known as Yongbyon, and threatened to rebuild them because it was angry that it had not yet been removed from the United States’ list of state sponsors of terrorism. The United States maintains that the North has not fulfilled the requirements for being removed from the list.

Building another Yongbyon in Syria, for instance. 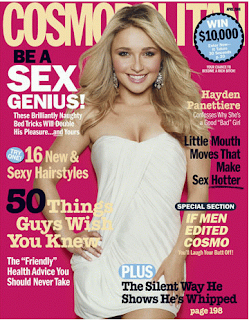 I've always found it peculiar that, as I approach the supermarket checkout counter, there are magazines with covers blaring issues that it would be entirely inappropriate for me to bring up with the other people in line, or with the checkout clerk. For example, I would be ill-advised to turn to the nearest stranger and, pointing to the cover shown at right, ask, "I wonder what 'little mouth moves' they're referring to?"

And what if a male supermarket manager posed that question (or read almost anything else off the cover) to a female subordinate? A career-ender, if he's lucky.

Seems like an odd double standard; you can put a rude thing in someone's face but only if you hope to make money off it.
Posted by Ted Sternberg at Friday, September 05, 2008 No comments:

I'm glad someone said it, and said it so well. I've always been puzzled at the news media's breezy attribution of political speeches to the people who read but don't compose them. I'd think the media would at least use this stick to beat the politicians they don't like.
Posted by Ted Sternberg at Friday, September 05, 2008 No comments:

My local police department has a handout on safeguarding your house, and owning a gun isn't on the list. In fact it's discouraged. Maybe because, as the Brady campaign argues fairly convincingly, your gun's most likely victim is you. And I'd add to that my doubts that an amateur could get the better of a well-trained criminal, in a shoot-out.

On the other hand,

The 34-year-old mother of two grabbed a shotgun that had been pointed at her face early Wednesday, starting a struggle that ended with one intruder killed with his own weapon and another in the hospital.

I'm grateful to all the people who do keep guns in their homes -- 50% of homes have guns, so they say -- for acting as a deterrent, providing that small but definitely non-negligible and fatal occupational risk all burglars run. I suspect that in the absence of that deterrent, there would be many more burglaries.

Hard to see why this is news:

We see this "peace plan" recycled over and over: hand over what we failed to take when we attacked you in 1973, and by the way we plan to keep supporting the terrorists who want to destroy you utterly.
Posted by Ted Sternberg at Friday, September 05, 2008 No comments:

Why are there so few (and fewer than once) American-born computer programmers and, in college, computer science majors? In How our Culture Keeps Students out of Science, Peter Wood (starting from a story about Bill Gates lobbying for H1B visas to feed his need for programmers, but then broadening his scope to all science) argues that it's a combination of sloth, misplaced priorities and maleducation. That's the conservative view, of course. Others will say we'd produce more Einsteins (or Richard Stallmans?) if we gave every public school student a laptop and their teachers a "reduced class size".

I don't happen to think this "shortage" (alone) is a social problem worth worrying about, but as long as people are going to talk about it, I'll propose a theory inspired by the economics of international trade: People are sorting themselves into professions in a way that reflects comparative advantage. In international trade, the idea is (oversimplifying greatly) that if an acre of English land can produce 10 tons of wool or 10 tons of milk, and an acre of Portuguese land can produce 5 tons of wool or 8 tons of milk, England will raise mostly sheep and export wool to Portugal while importing milk from Portugal, even though England could, if it really wanted to, produce milk even more efficiently than Portugal can. Turning, then, to the market for skilled labor: bright college-age Americans can become computer programmers but they can also cash in on their American language and social skills to become lawyers, bankers, journalists, politicians, clinical psychologists etc. Meanwhile a bright college-age resident of India or China, looking to emigrate to the USA, enjoys a comparative (even if not absolute) advantage in those fields that don't require native-level English language and American social skills.

The old days, when the engineers looked just like the lawyers and the bankers (except for the pocket protectors and other fashion faux pas), reflected a period of labor market autarky.